We Will Remember Them.... 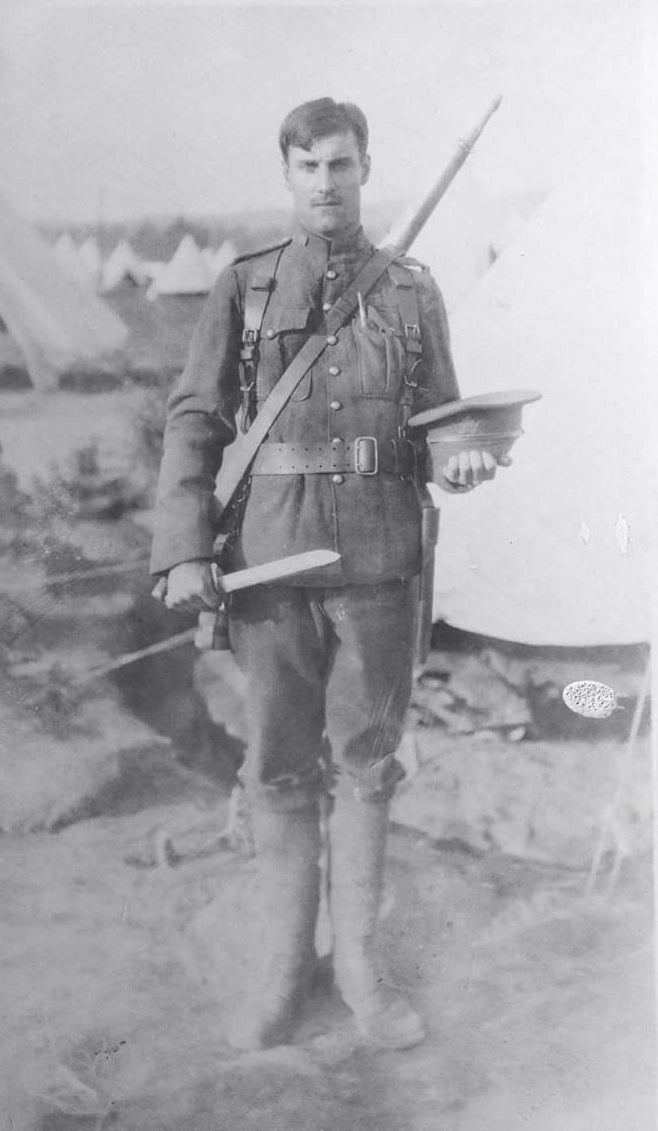 Since the end of the First World War, it is a moment we take to remember those, the members of the Armed Forces, that died in the line of duty.

Remembrance Day marks the day that World War One ended, at 11am on the 11th day of the 11th month in 1918. At 11 am, we remember the people who have died in wars, with 2 minutes of silence. We gather in memorial parks, at Cenotaphs, workplaces, community halls, schools, and even homes....Yes, we stand in honour for all who have fallen in the service of their country.

It is an emotional day for a lot of people. Myself included. I admit...I have a gentle, sensitive heart. I feel for others. In New Brunswick, where I am from, Remembrance Day is a Statutory Holiday. I was a part of Scouts Canada, as a Beaver Leader. We partook in the Ceremonies by walking in the parade to the Cenotaph. It was hard to hide the tears. Yup...I’m a softy.

I did not lose my Grandfather to the War per se. But, in a roundabout way, I guess I did.....
Let me introduce my grandfather on my Dad’s side,....Leonard Patrick Henry. He was a kind and handsome gentleman. He loved kids. He loved to travel. He loved chatting with family & friends. (My Uncle said he could talk for HOURS and he used to chat quite a bit with Harper Kent...google him.) He ran a grocery store, ran a boarding house, drove taxi and was a Barber. He was an Inventor & he loved building with a meccano set, which was actually a present for my Dad & Uncle Guy. Apparently, he occasionally rode a horse in the War (my Dad has the spurs) and once was trampled by a horse (hurt his shoulder). He had sinus issues (like me) and he had severe Asthma. He always wore a suit & tie. So I am told. You see...I never got to meet my Grandpa Henry. He died 9 years before I was born.

My Nana, his wife, always told me that he would have loved to have met me....because he loved kids. I often wonder if she thought I looked like him. And, I wish I had asked my grandmother more questions about him. After all, she loved to tell us stories of the past. I guess, she and her husband were well suited together :)

I had a phone conversation with my Dad, desperately trying to figure out just who Leonard Henry was...what was his participation in the War. I am sharing what little I know, to keep his memory alive. I ask my relatives forgiveness if some of my information is inaccurate. I am writing what I found out through my Dad, my uncle Bernie and online.

He was a Private. He enlisted on June 20th, 1916, when he was 20 years old. He was born in Rustico, PEI and lived in South Tetagouche, NB at the time of enlisting. He was Soldier #666752, 165th Battalion, Brigade 4. He would have trained in Val Cartier, Quebec before sailing to England in March 1917, where he partook in more training. His diary tells us that the ships’ passage took him over where the Titanic sank. The 165th Battalion was absorbed into the 13th Reserve Battalion on April 7, 1917. He, also, mentioned that he marched where the King was. ????? (It’s a mystery for me, too.) My Uncle says that he was good with horses. He led them with carts filled with equipment for the soldiers.

Have you seen the movie Passchendaele? I suggest you look it up and watch it. My Grandpa Henry was in World War One. He fought in the Third Battle of Ypres, also known as the Battle of Passchendaele. He was exposed to mustard gas (which contributed to his severe Asthma.) I was told that he was in the trenches for 6 months. And, I believe he was about 13 kms away...he fought in the city of Ypres. I can’t imagine what he went through. I highly suggest reading from https://www.thecanadianencyclopedia.ca/en/article/battle-of-passchendaele

Grandpa received the Good-Conduct stripe which is a British Army Award. As with most Veterans, he did not like to talk about the War. It is unfortunate that we do not know more.

I am glad that this conversation opened-up with my family. I will continue to do research. I hope to someday visit the monuments in place in Belgium. My suggestion to you is...talk to your family. Record your history. Be proud. And, partake in Remembrance Day. Wear your poppy on your left side, over your heart. Silently thank those that gave their lives and those that fought in service of our country....CANADA.